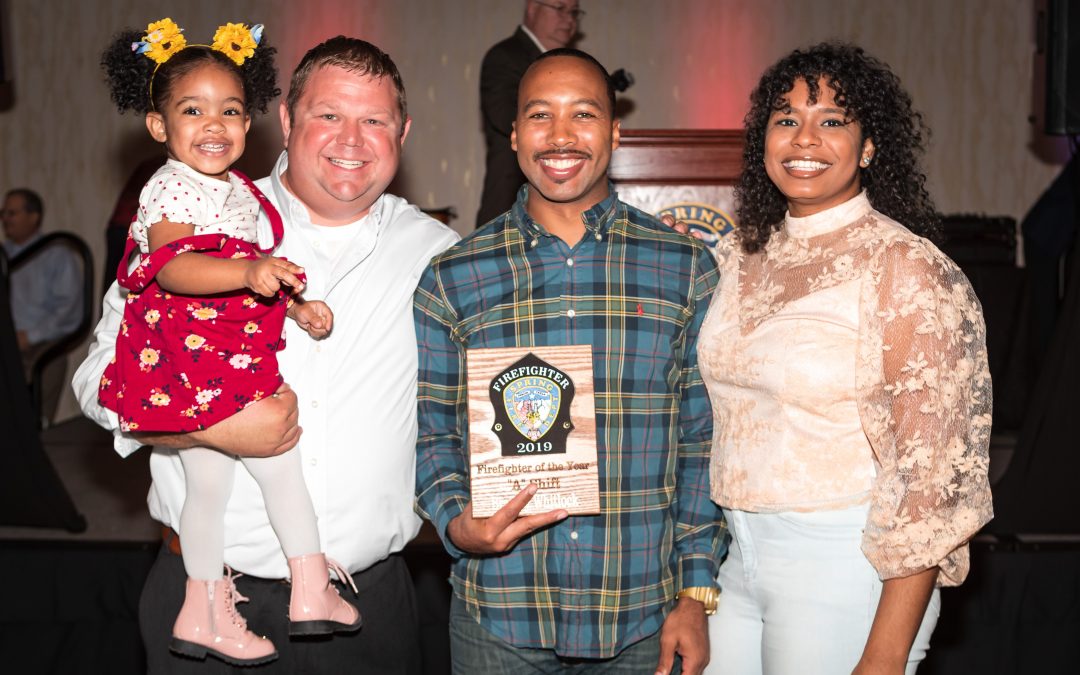 Honoring Outstanding Achievements on the Fireground

On Saturday, November 23, the Spring Fire Department honored firefighters who went above and beyond for the citizens of Spring in 2019.
Five exceptional people were honored with Spring Firefighter of the Year Awards. Chosen from each shift, as well as from the volunteer and part-time ranks, these firefighters set the example of how a public servant should be. 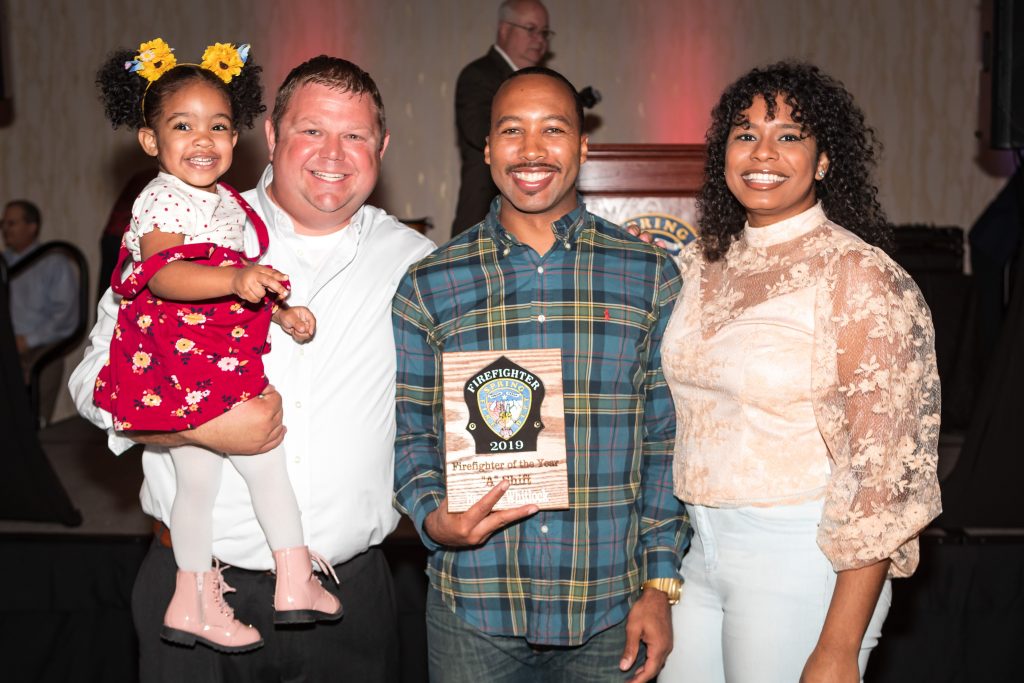 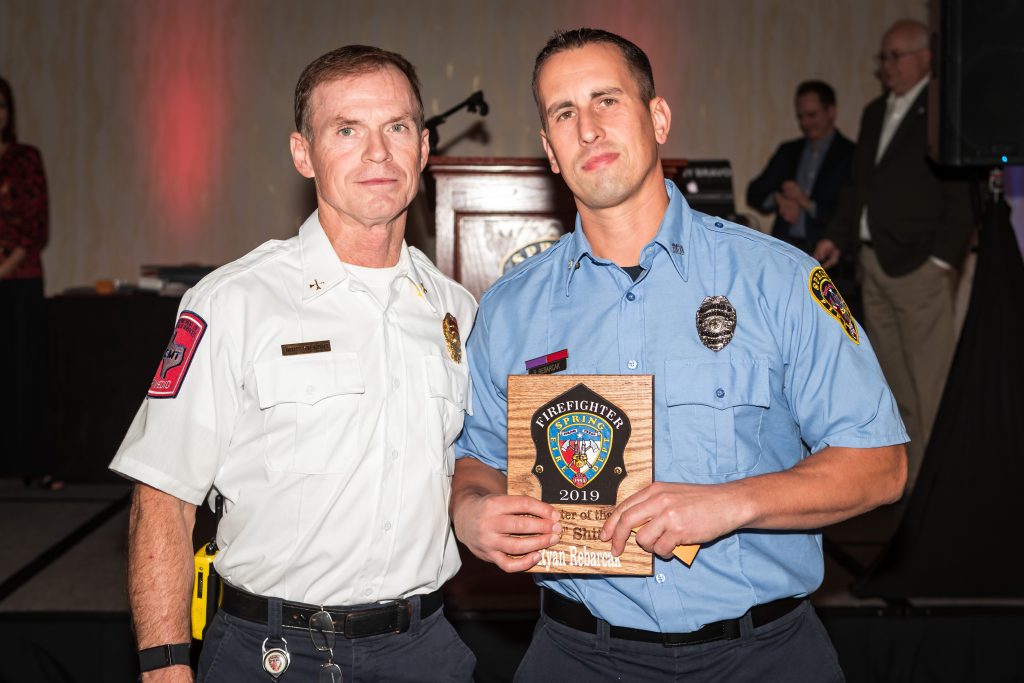 The 2019 honor for volunteer firefighter of the year went to Marc Corbeil, who is a Lone Star College math professor when not responding to 9-1-1 calls in Spring. Captain David Paige was honored as Spring’s Part-time Firefighter of the Year. 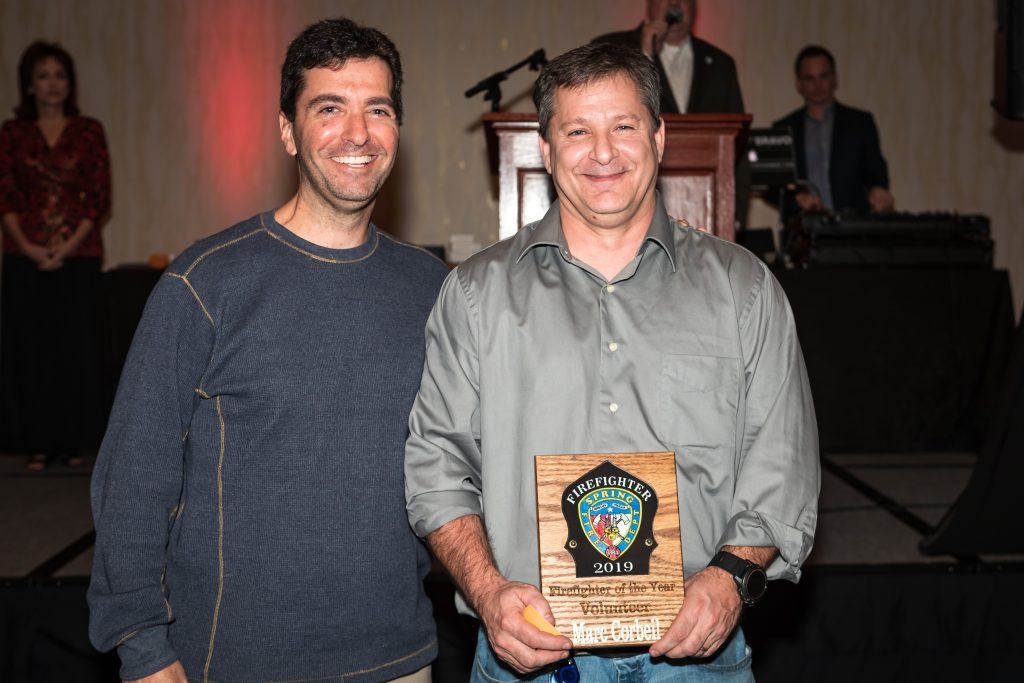 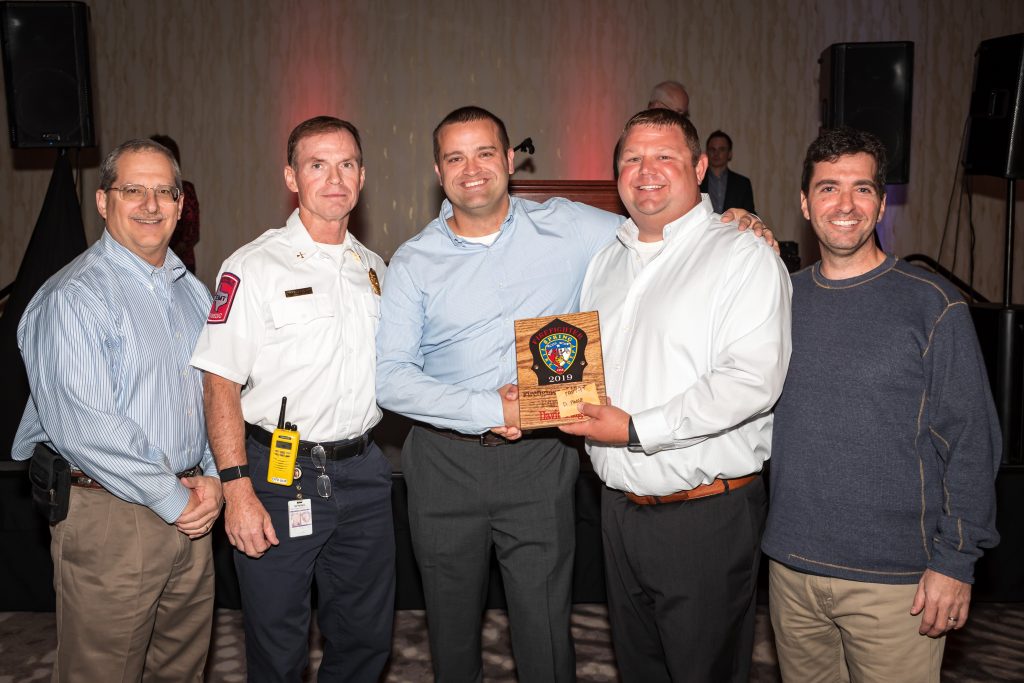 Special Awards were handed out for four significant events that Spring firefighters worked in 2019.

On May 14, 2019, the Spring Fire Department Rescue Team was dispatched to assist the Klein Volunteer Fire Department with a trench collapse, which left one man trapped up to nearly his waist. Once appropriate shoring elements were placed for safety, the arduous digging process continued for several hours until the victim was freed.

“The rescue team members who worked inside the trench to help free the victim received the Silver Life Saving medal,” said Spring Fire Chief Scott Seifert. “Those who supported their actions from the ground level received the exceptional duty commendation.”

The Silver Life Saving Medal is awarded only to those principally involved in saving the life of another person and whose personal actions were directly responsible for the lifesaving act. 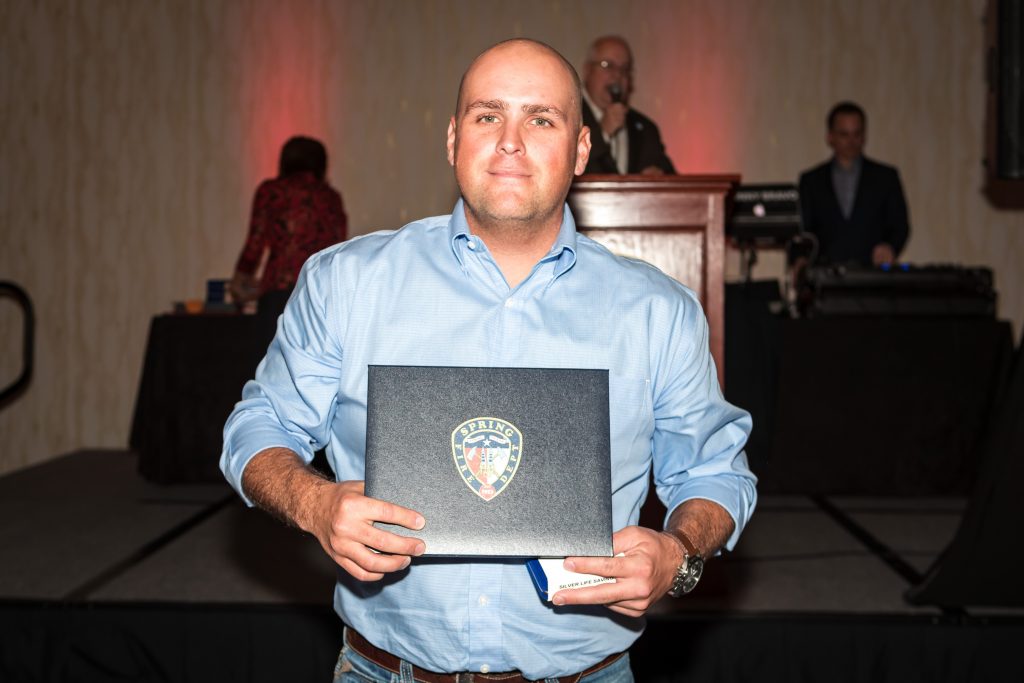 This Exceptional Duty Commendation is awarded to a member of the department for a highly credible accomplishment bringing public acclaim to the department, or fire service, as a result of devotion to duty or service to the public. Also receiving commendations are District Chief Chris vonWiesenthal, Captain Shannon Stryk and firefighters Jeremy Cobb, Logan Hall and Jason Wal. 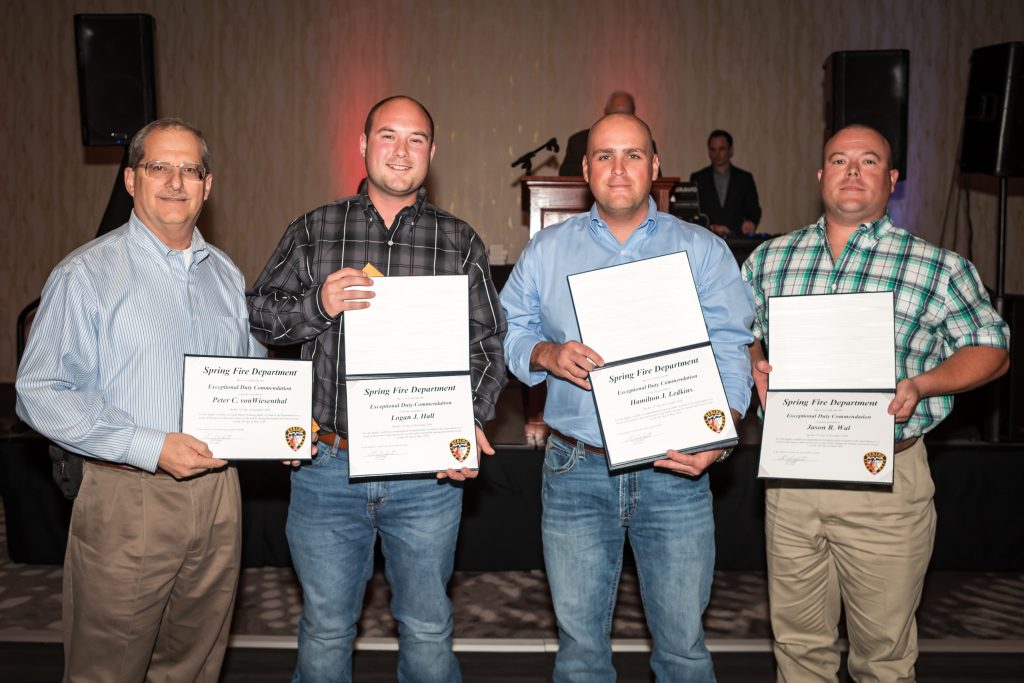 On September 3, 2019, Spring Fire Department crews were dispatched to a Spring Lakes house fire where someone was trapped inside. Upon arrival, Engine 73’s crew entered a second-floor bedroom window to rescue the trapped woman. Captain Paige ascended a ground ladder and broke out a window to reach the woman and pull her to safety.

Firefighters Jonathan Hart and Jordan Hendricks assisted Captain Paige down the ladder. Quickly transported to the hospital by Cypress Creek EMS, the woman was able to make a full recovery. 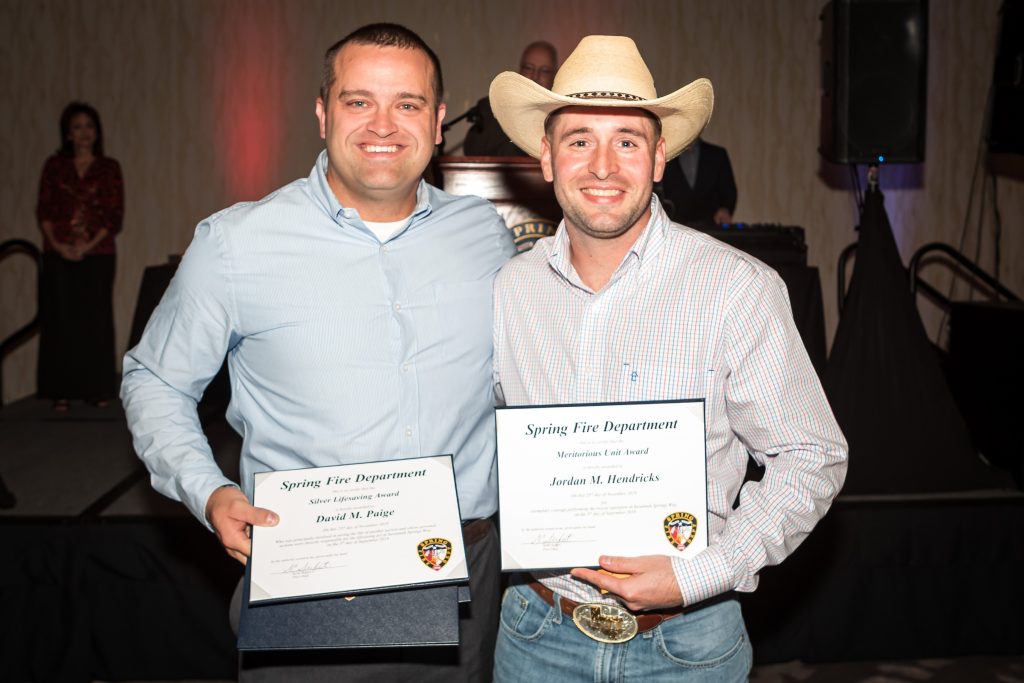 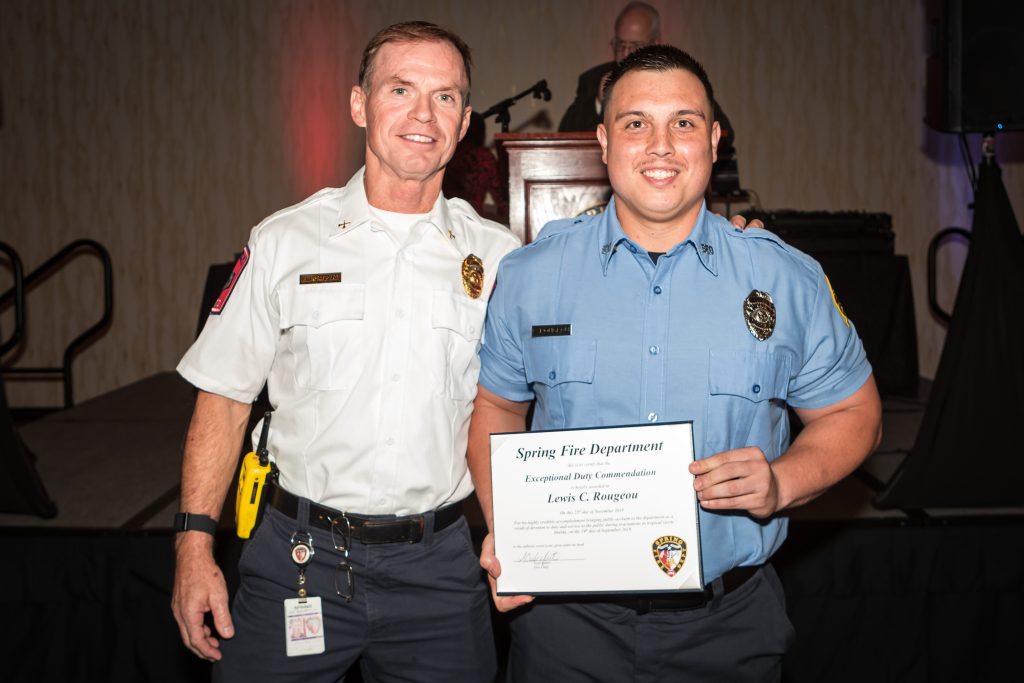 On October 9, 2019, the Spring Fire Department was dispatched to a hotel on fire at the Motel 6 near I-45 and Cypresswood. Upon arrival, the crew of Engine 77 found multiple people trapped on the third floor hanging out of windows.

“If this hotel fire had occurred 6 months earlier it could have had a completely different outcome,” said Seifert.

Due to the Harris County Emergency Services District 7 board approving the hiring three additional personnel that were not initially funded in 2019, the Spring Fire Department was able to staff all nine of our fire stations beginning in August.
“Why is that important?, asked Seifert . “Because there would have been no one staffing Station 77 and Station 71’s crew was training at Station 78, so the two closest fire stations wouldn’t have been able respond immediately. That ESD funding decision allowed Engine 77 to be staffed and arrive on scene quickly that fateful day.”

Engine 77 crew brought five civilians down on ladders in a matter of minutes. Honored with the Silver Life Saving Medal were Captain Jermaine Wilson and firefighters Shawn Kohl, Nathan Smith and Christopher Soliz. 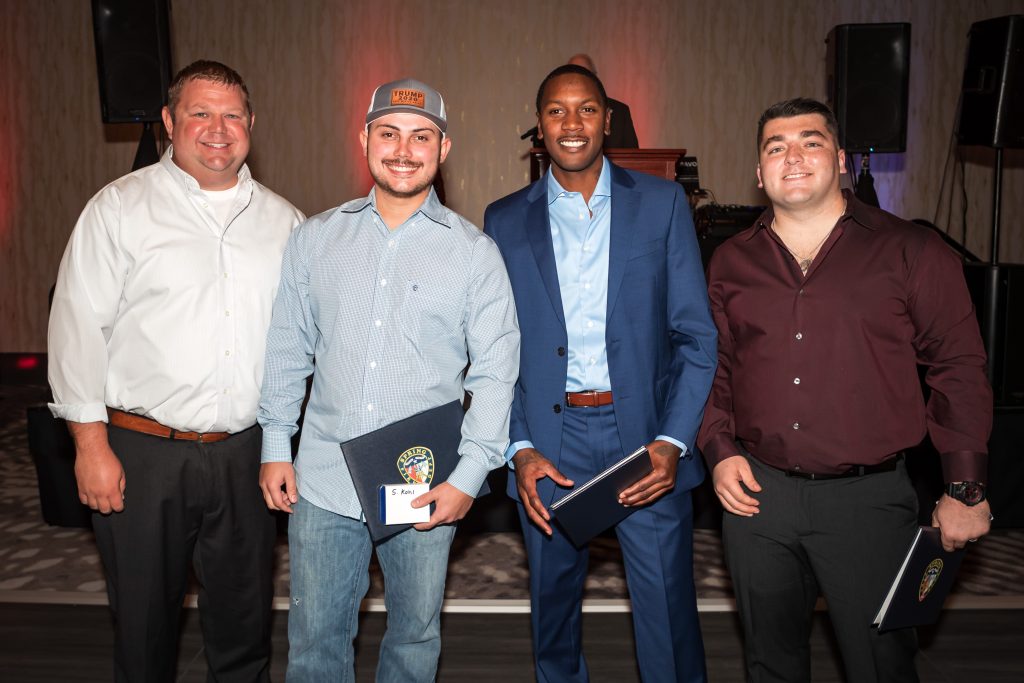 “At this same incident, Deputy Chief Jerod Davenport spotted a man preparing to jump from a third story window to escape heavy smoke,” said Seifert.” “Deputy Chief Davenport grabbed firefighter Jeff Paige and threw an extension ladder to the third floor where firefighter Rodger Hernandez assisted with bringing the victim down the ladder. For their efforts in saving this life, Chief Davenport and firefighters Paige and Hernandez are awarded the Silver Life Saving Medal.” 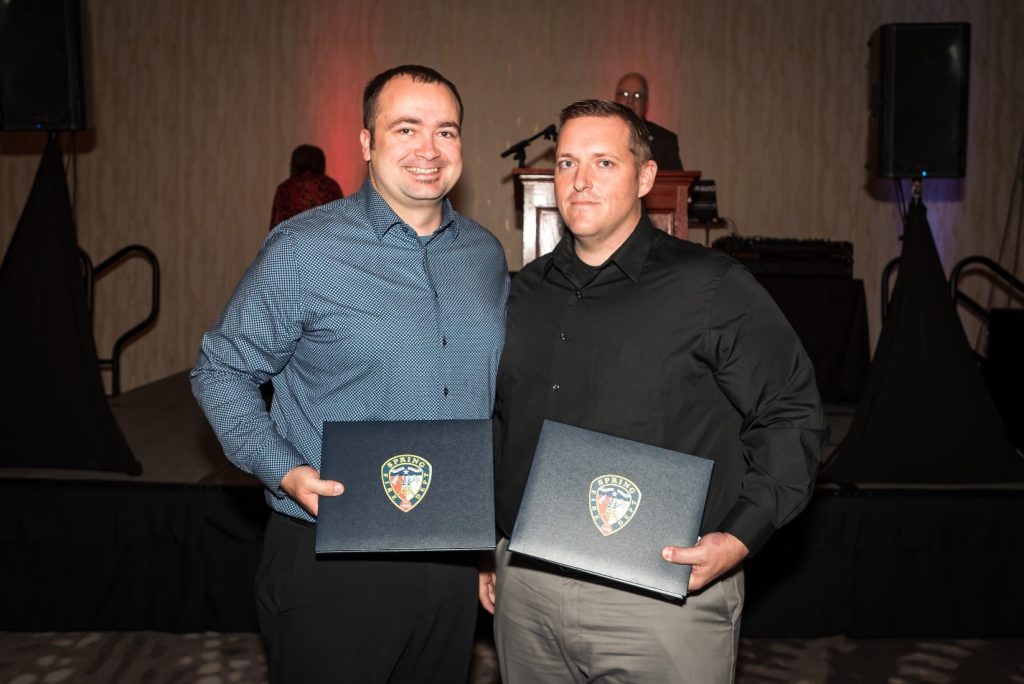 “Assistant Chief Robert Logan and Deputy Chief Davenport’s leadership, level of calmness and actions on that day as incident commanders led to multiple rescues,” added Seifert. “If these officers had not be on scene the outcome may have been fatal for a civilian or a firefighter but due to their actions, everyone went home like they were supposed to.”

For their successful leadership, Logan and Davenport were awarded
Exceptional Duty Commendations.

Before the night was over, former Fire Chiefs had received their badges. Pins honored Lifetime Members, 25, 15, 10 and 5 members were handed out and 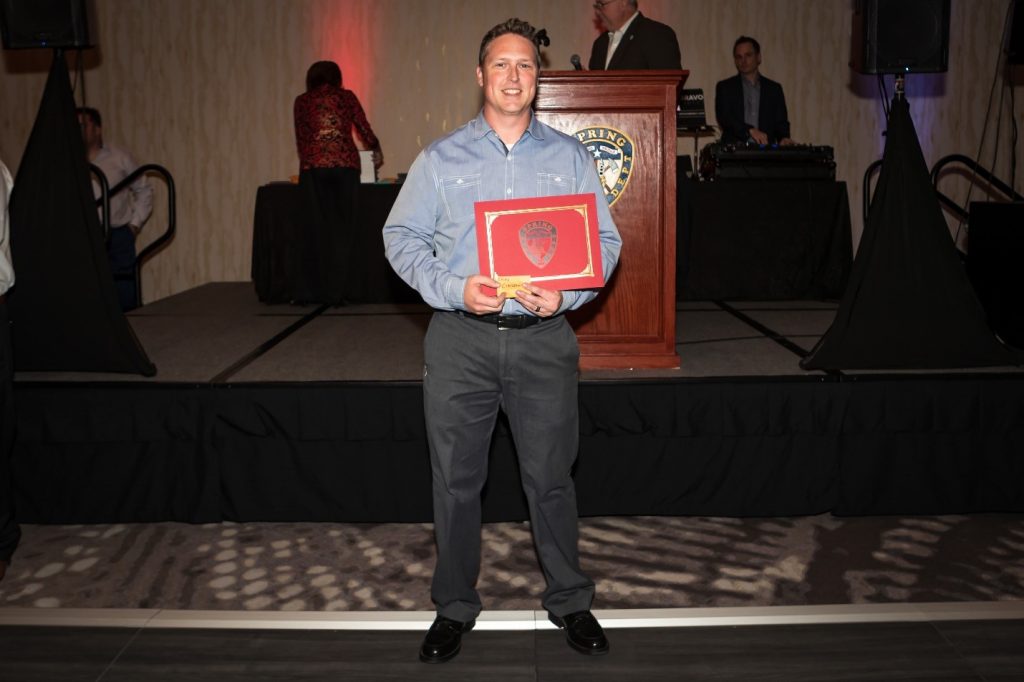 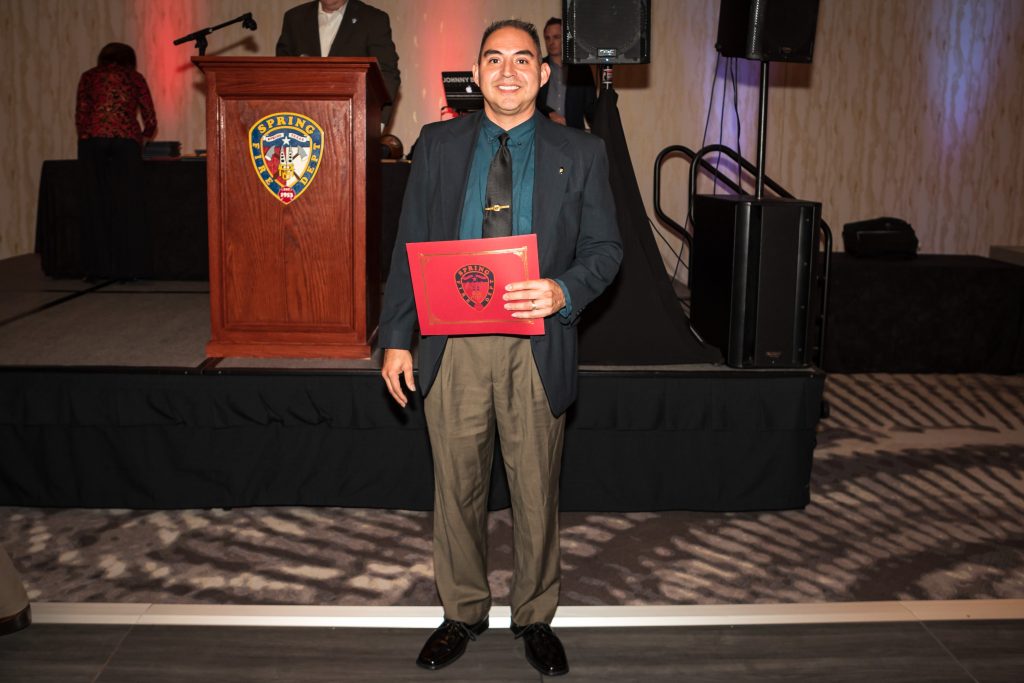 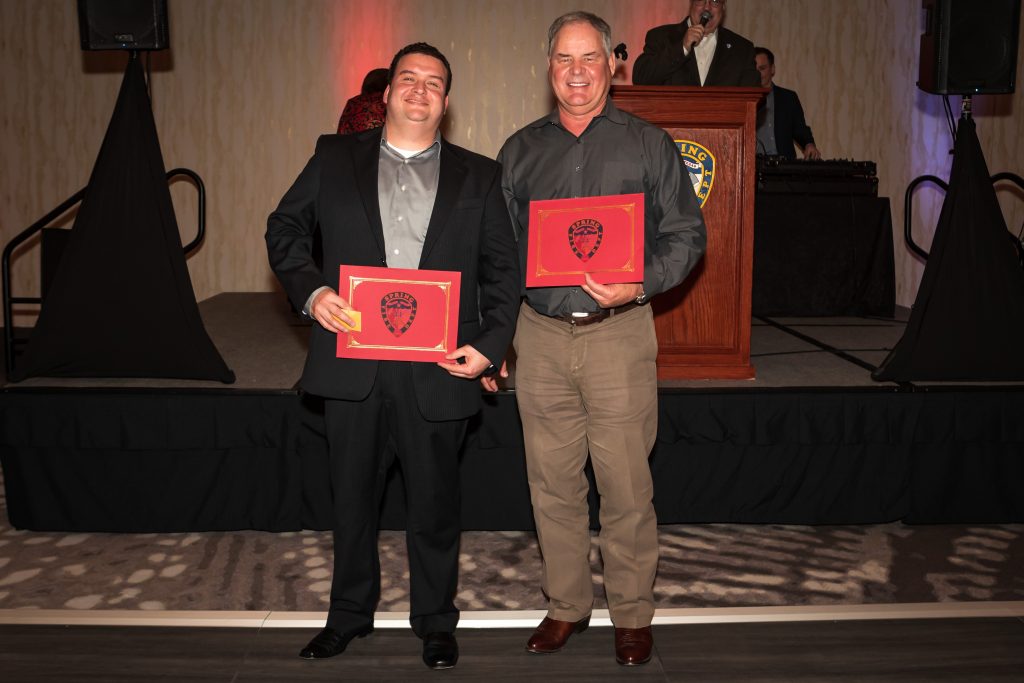 Every year Fire Chief’s Award goes to an incredible person whose commitment makes the department a better place for staff, volunteers and the Spring community.

“The person I chose to receive this year’s Fire Chief’s Award was instrumental in starting our Spring Fire New Hire Academy and has continued to improve it with each new class of cadets,” said Seifert. “The new hire training academy has grown from one week to three solid weeks of instruction under Captain Noel Webber’s leadership. Captain Webber is the recipient of this year’s Fire Chief’s Award because he is exactly what I am looking for from everyone within our department.”