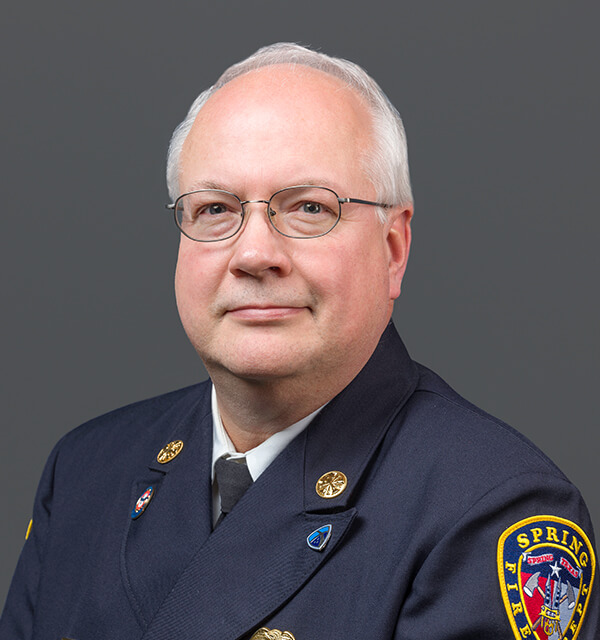 Scott Seifert’s interest in the Spring Fire Department began in 1985, but he could not be a volunteer then because he lived outside the district boundaries. Then Scott was a Country & Western Nightclub Disc Jockey and Program Director, playing every kind of music even though Christian music is now his favorite. Fast forward a few years while working at a local nightclub, Scott finally achieved his dream of becoming a volunteer at Spring Fire Station 71 in Old Town Spring. Since he worked at night, his station officers asked him to help enhance daytime response times. Within weeks of beginning training, he was serving as an incident commander at a house fire. His successful efforts to save that structure fueled his desire to serve and keep training.

As a Chauffeur/Pump Operator, Scott honed his skills in Incident Command and Vehicle Extrication. After earning his Captain and District Chief badges in 1997 and 2002, Scott served as Assistant Fire Chief before becoming Fire Chief in 2015.

Whether at TEEX Municipal Fire School, Fire Rescue International or the IAFC VCOS Symposium, training continues to play a strong role in Scott’s life. He is a member of the International Association of Fire Chiefs and the IAFC’s Volunteer and Combination Officers Section. He served on the VCOS Vision Project, tasked with preserving the Volunteer Fire Service, completed the IAFC Executive Chief Officer program in 2017 and in 2018 graduated from the TEEX Fire Service Chief Executive Officers program taught at the Mays Business School of Texas A&M University.  Scott is also on the boards of the Spring Volunteer Fire Association and Emergency Ministries, which provides Chaplain and counseling services for Fire, Police and EMS personnel.

A graduate of Klein High School, Scott is the proud dad of three daughters, Ashlyn, Isabela and Alyssa, and husband of Diana. When not at the Spring Fire Administration building, he is the Director of Operations of a local IT Service Provider and enjoys studying leadership, business, emerging technology, and personal development. Despite his many successful pursuits, Scott still doesn’t know what he wants to be when he grows up and in his free time, we hear that he actually does sleep!